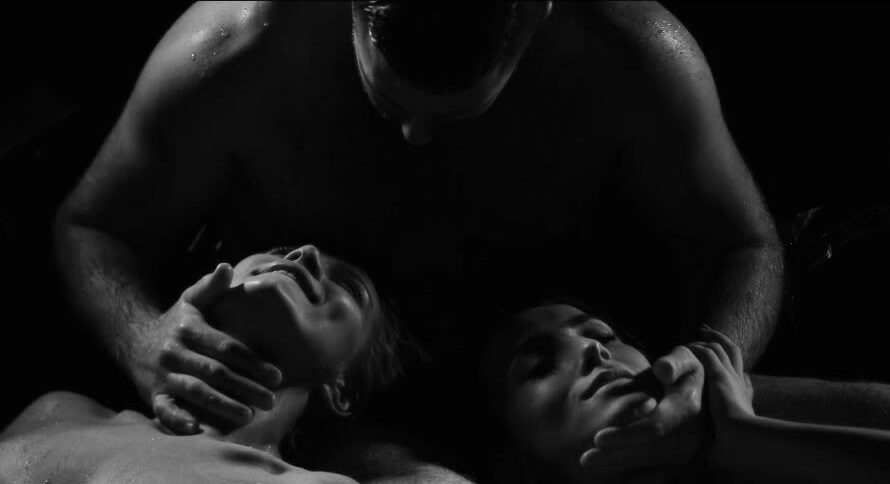 The image of the painting at the art exhibition kept running through Alfred’s mind. Suddenly, he had a realisation — triangles can have different forms. The essential aspects are obviously the three sides and three angles that add up to 180˚, but these sides and angles have the freedom to differ from each other. However, to create the strongest shape, it is most advantageable to aim for a perfect equilibrium between all the sides and angles.

Alfred didn’t inhibit any adversity for the current formation of their triangle but became incredibly conscious about the time and effort it would take to reach and stay within that equilibrium of the strongest shape. Still, the equilibrium was not necessarily always the desired state at a given moment. Just as in this moment, it was not present, but nonetheless the moment was perfect. He smiled gently. His thoughts meant he was indeed thinking about a future with Rebekah in it.

Suddenly, she took hold of Karen’s legs, folded them, and bend them upwards, significantly increasing the access she had to the juicy vagina in front of her.

Alfred remained deeply fascinated about what was happening in front of him. Rebekah was fully engaged and devoted to the pleasure of Karen. All her senses were fully present at the moment. Occasionally, she looked up and inspected Karen’s facial expressions. Attentively, she listened to the moans rushing out of Karen’s mouth, and the subtle changes between them. Delightfully, she got familiar with Karen’s taste and smell, which was distinctive; she already loved it. Her sense of touch was nearly omniscient. Her hands were holding Karen’s waist in between them, feeling the rhythm of the waves of pleasure inside the body. However, almost Rebekah’s entire consciousness had situated itself in and around her mouth, discovering the shape and feeling of the soft flesh it was touching and the location and sensitivity of the clit.

Suddenly, she took hold of Karen’s legs, folded them, and bend them upwards, significantly increasing the access she had to the juicy vagina in front of her. While she repositioned herself slightly, she took the opportunity to have a better look at what she was about to dig her face inside of again. Alfred was confident she was elated by what she saw. It was beautiful. He honestly thought all of them were beautiful, and he never understood the widespread insecurity women had about their love organs, their pleasure butterflies, their lust caves, their happy valleys, their velvet gloves — he had a deep appreciation for all of them: their complexity, their delicacy, and their functions.

Rebekah glanced over to Alfred, the short exchange of their gaze made it clear they held the same sentiment. The moment was brief but profound, emitting feelings of acceptance, agreement, and gratefulness in ways words never would be able to. It happened so quickly, Karen was unaware of it happening, as she could already feel her flesh being gently sucked into Rebekah’s mouth again. The gained accessibility was immediately put into use; Rebekah stiffened her tongue and let it gradually slide into Karen’s tunnel, who groaned loudly in the process. It took a lot of effort, but it was worth it. As the speed started to increase, and Rebekah was virtually fucking Karen with her tongue, Karen consciousness expanded beyond her body. Not only the feeling, but the thought elevated the energy for all of them. The breathing turned into hyper mode, the body stiffened, and Rebekah could feel the flesh around her tongue pulsing and tightening. The equation of the situation had caused Karen’s orgasm to be long and incredibly deep.

Karen was still captured inside of her orgasm, unable to respond or open her eyes. Alfred was sitting dazed and amazed with his fully erected penis pointing up towards the ceiling. Rebekah, still in between Karen’s legs, could not help herself from glancing over. She was aroused beyond the point of control.

Rebekah stood up to walk towards Alfred, determined to blow his mind as well.

“Wait,” Karen uttered and pulled Rebekah towards her face, “one more kiss.”

Then she watched as Rebekah moved away from her, her eyes gliding over the gentle curves of the athletic body. She could not believe how beautiful their new found love was.

“Hey, you,” Rebekah teased and sat down next to Alfred. Immediately, she started kissing him wildly, clearly taking control. Alfred let her, he surrendered. The previous softness she enjoyed was exchanged for robustness. Her hands stroked his body; feeling the stubbles of his beard, the hairs on his chest, and all the muscles underneath. His build was strong but not intimidating. In the same manner as before, she moved slowly and teasingly downwards, this time Karen watching closely. The shape had shifted — Rebekah and Alfred creating the focus point.

He wanted to warn her, but she did not care and continued until he had emptied a deep orgasm inside of her mouth.

Her lips, touching the warm tip, greeting it with gentle kisses. She continued like that up and down his shaft, professing her love for him before she would make him feel the intensity of her lust. With every kiss the anticipation of feeling her warm and wet tongue grew inside of Alfred. In Rebekah’s mind, he was already deep inside her mouth, releasing the fluids of his ecstasy into her throat. She needed to control herself, she wanted to gift him with a build-up that would enable him to reach a deep climax as well. She opened her mouth, just enough for her tongue to come out of hiding and passionately lick what was right in front of it.

Alfred tilted his head backwards and shut his eyes, he could feel she was about to fully engulf his blood-filled flesh at any moment now. Suddenly, he just felt warmth and softness all around. With one hand, Rebekah held his tower of pleasure steady by the base and started to suck and lick every other part of it vigorously. The speed increasing… She knew exactly what to do.

He wanted to warn her, but she did not care and continued until he had emptied a deep orgasm inside of her mouth.

Both of them coming in her mouth had been incredibly arousing. Merely the deliverance of pleasure — to people was in love with — had caused Rebekah to be on the edge of an orgasm. Something that was not necessarily uncomplicated for her to achieve. She had learned and accepted she needed trust and safety for it to happen. If it was present, she could let loose and nothing seemed to be off-limits.

Karen moved herself towards Alfred and Rebekah, she wanted to pleasure her with the help of Alfred, and without the exchange of words Alfred had taken a hold of Rebekah and was massaging her breast with both hands. She was leaning again his chest, surrounded by his strong legs. For a moment, Karen was unsure how she fit into the picture.

“Sit on top of me,” Rebekah suggested, secretly hoping the distance between their pleasure buttons would be minimal.

Karen sat down, and immediately could feel the heat coming from Rebekah’s vagina with her own. Alfred could see the slight uncertainty on Karen’s face but as she moved more down onto Rebekah it change into bliss. Rebekah guided Karen’s hips with her hands until she felt that they had reached her optimal position. Karen’s mouth fell open when she felt the warm flesh gliding of hers and instinctively started moved her hips up and down with the guidance of Rebekah’s hands. Their clits were not quite touching, but they both were sensitive enough to feel the energy build around them.

Karen squeezed her eyes, her face tightened, and she screamed jointly with Rebekah, who she had pulled along into another orgasm.

Alfred had rarely seen anything this beautiful and arousing and beyond his expectation could feel himself getting hard again. So could Rebekah. For now it would stay between them.

The rubbing increasing in intensity and speed. Rebekah was about to come but controlled the release of her energy.

“Tell me when you are coming,” she stated.

Karen said nothing, and maintained the rhythm they were in. She gazed into Rebekah’s eyes and shortly after into Alfred’s. Communicating how amazing the experience was for both her mind and body. Alfred recognised she was reaching the edge of her climax. Karen rubbed hard, and Rebekah pulled with force. She was unable to control it any longer and her orgasmic screams fled out of her lungs into the surrounding air. While living her orgasm, Karen did not stop.

“She is coming,” Alfred whispered when he recognised it in her face.

Karen squeezed her eyes, her face tightened, and she screamed jointly with Rebekah, who she had pulled along into another orgasm.

Karen couldn’t stop, it felt too good. They enjoyed another orgasm together.

Alfred was in complete disbelieve, about what he had witness and the fact that all the blood had returned downwards. He was ready to go again. 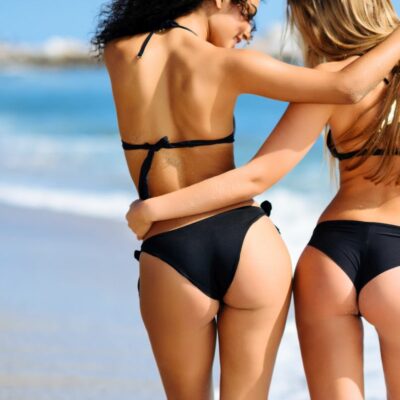